Beyond “Bad Bards”: Improving Performance Climate in the SCA 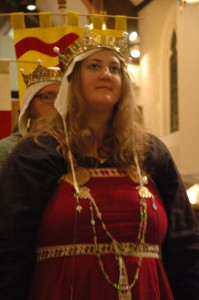 This is a guest post from THL Kasha Alekseeva, Baroness of Cynnabar, and renowned performer in the Middle Kingdom. The post is a response to the article “You don’t hate the Bardic Arts, you hate Bad Bards“

As RUM’s new Dean of Performing Arts, I used this article as an opportunity to think about the perception of performing arts in the SCA, and the unique challenges it has when compared to other SCA arts and sciences.

This article addresses the issue of people disliking the “bardic arts” and proposes that this is due to unsuccessful performances and to bards who (intentionally or unintentionally) are rude enough to entrap people in their performances. The article also discusses several kinds of less successful bards and encourages the readers to be patient with their shortcomings while they grow in their craft. I think all of these ideas are wonderful.

I love performing arts and want them to succeed in the SCA. And I know that bad reputations and schisms hinder our success. So the article made me start to think about the larger issues involved. If the problem of “hating bardic” can be solved by consideration for others and tolerance, what would specific considerate and tolerant acts look like? How can we turn some of our haters into fans? How can we coexist with those who will always be haters?

I agree with the author of the article that most of the time people who “hate bardic” are frustrated because they have been unwillingly forced into being audience members. But there are other reasons people may have to dislike performances that were not sufficiently discussed in the article (being outside its scope). The two most important, I feel, are 1) boredom or distaste caused by unsuccessful performances and 2) dislike or disapproval of performers’ choices of material, generally because it is “out of period”.

It would be easy to discount these voices as snobs, just as it would be easy to discount the performers they dislike as incompetent. But attitudes like these are unfair to everyone. For me, an inexperienced performer who is struggling to improve is very different from a lazy performer who doesn’t care whether people are enjoying themselves. An audience member who doesn’t feel like commedia dell’arte right now is different from a person who thinks the very existence of theater is an infringement of his or her leisure time.
The “out-of-period” debate is a little stickier, so I’ll talk about it in more detail.

A major question that comes into play here is what “out of period” means and whether there should be value placed on “period” performance material. Most SCA performers–at least those who are not reacting in anger to expectations they feel have been unrealistically imposed upon them–agree that to a certain extent, “period” material is valuable. Most disagree on what the definition of “period material” is and how much it ought to be valued in comparison with other important aspects of performance (e.g., accessibility, ease of transmission, feasibility with modern equipment, financial considerations, the performer’s taste, etc.).

I personally believe that there is room within the definition of “period-correct” for a great deal of leeway. It would be harmful for us to restrict SCA performance to literal, extant pre-seventeenth-century material. Think of it this way: We’d never tell someone that she can only wear an actual extant fifteenth-century garment! Yet I see us do this with musicians (did you know music composition is no longer a category at A&S fairs?) and with dancers (how many of us have danced a newly composed SCA dance?). For performing arts to be meaningful to both performers and audiences, we need to be able to create new art. We need songs and stories that commemorate things that happen to us, not just to King Richard or Charlemagne. We need to encourage creators, because a very important part of what we do in the SCA is re-create!

Of course, I think most SCA artists would agree that the goal is to re-create things in a period style and that “period style” is something we should value. But what does “period style” mean? I can think of various definitions for the term that would be more or less acceptable to me personally. Perhaps it should mean “I replicated materials working-class people had access to in 16th-century London” or “I used a process laid out in such-and-such 14th-century text” or “if a typical tenth-century Spanish monk saw my performance, he wouldn’t have found it strange”. For some of my performances, I prefer that last one. But for others, my definition is something more like “my audience had a reaction that was analagous to the reaction thirteenth-century French courtiers might have had”. All of these definitions (and, I’m sure, many other potential definitions) are valid!

One special challenge of performance is the fact that (as SCA cooks know very well), modern tastes are not necessarily the same as medieval ones. That is NOT to say that medieval performances are unacceptable to a modern audience. What it does mean is that modern audiences, lacking a medieval cultural background, may need to be given some extra information in order to appreciate the piece. That might mean translating the piece into our vernacular (American English, in this case), or handing out program notes to explain the structure of the piece, or teaching the audience the original hymn this song is based on, or even changing the jokes and allusions in the piece to equivalent modern jokes and allusions.

When it comes to unskillful performances, I think it’s important to remember two things. First, everyone starts out unskilled and then gains skill; therefore, in order for skilled performances to happen, unskilled ones must also happen. Second, it is very rude to subject audiences to painful experiences. Balancing these two principles is one of the biggest challenges of the performing arts community. What can we do to navigate this challenge? Below, I’ll talk about some specific actions we can take to foster growing performers while pleasing audiences.

Things Performers Can Do to Boost Performance Quality, Encourage the use of Period Material, and Challenge the Haters

Things Event Staff Can Do to Allow Entertaining Performances to Occur

Because we have to some extent already begun to do some of the things I have mentioned, SCA performances (like everything else in the SCA) are constantly improving and developing. I’ve witnessed some very cool and entertaining performances recently. I’ve also witnessed some that didn’t quite succeed but were done with genuine respect for the material and love of the craft–and I enjoyed those, too.

To see some of Kasha’s work check out her band, Psallite