This post was written around November 23rd, 2014. I just haven’t gotten around to rereading it and posting. Enjoy! 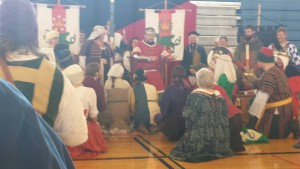 We’re going to be Laurels!

So apparently I’m going to be a Laurel…

I guess the place to start is with Closing of the Range. We weren’t intending to go, but were summoned to court, so we made an appearance. It was a chance to try out the garb we have for Martin and also to see if I fit into my old garb and/or can nurse in it. Martin’s garb was fine. Maybe a bit big at the time, but now it’s just about the right size. My garb fit…. sort of. I tried my front lacing cotehardie, and I could get it to tie completely, but it fits only somewhat better than it did when I wore it to Step Spritely last year and was around 3 months pregnant. The main problem, unsurprisingly, is the bust area. Nursing was problematic because the cote is not quite low-cut enough, and lacing is giant pain. Martin didn’t like the clothes either. *Sigh* So basically I need to add a giant slit down the center of my semi-fitted tunics or make new garb.

I opted to make some new garb. I’d been intending to make a couple of viking outfits before Martin was born, but I didn’t get around to it. Now I felt motivated. Of course then I found that my sewing machine, which I had fixed up a few months ago was making knocking sounds and not zig-zagging properly. In fact it hadn’t been zig-zagging well for a while. But I borrowed Arin’s machine, and blasted through making me some viking. I even made some cardwoven trim. The first trim I’ve ever made and then used. It was a threaded in pattern, but still. I listened to the WWI podcast I referenced in the last post while working on it. With a day or two to spare I had OK nursing garb for Grand Day of Tournaments. Yay!

Not yay was that I caught a cold around Wednesday before GDOT. On Saturday I was pretty stuffy but otherwise alright. Given that Robyyan and Fern were coming and Kasha and Ermenrich were being invested there was no way the symtoms I had would keep me from going.

Speaking of Kasha and Ermenrich’s investiture, getting the music to work was far more challenging than anticipated. I think we were up to plan F by the end. Emma and Holly were both sick so couldn’t make it. Before Emma got sick the plan was to play Palestrina’s Sicut Cervus on strings. Emma was going to play the tenor part on gamba and I was going to play the alto. When she got sick the plan was to have Robyyan play the alto on bass recorder and for me to move to the tenor on gamba. I was sad because I’d been practicing the alto part for weeks and I’m not so confident on gamba yet, but I worked on it and was more or less ready by Saturday. Then it turned out that Robyyan had a tenor cornemuse that could play the tenor part at pitch. Yay! Of course now that I’d worked on the tenor part I was a bit rusty on the alto.

The performance went… not so smoothly. Aaron bumped me with his bow which I thought meant we needed to stop. So I stopped and then everyone else stopped. Also we were not together when we stopped anyway. Eventually we restarted, and this time we stayed together until the end. The timing of our ending ended up being about right for the procession.

Kasha and Ermenrich’s investiture was beautiful. They are going to do such a good job as Baron and Baronness. 😀

Then Robyyan got called into court. Of course Aaron and I looked at each other because that’s a bit suspicious. My first thought was that it might be time for one of us get put on vigil. But then I thought maybe he’s getting a Sapphire or something. Although that would be a bit weird to award him in Cynnabar. Then when he begged a boon, I was thinking that I didn’t think he had any other apprentices or protogées. And then Aaron was called into court. 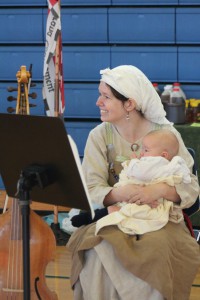 Watching as Aaron was put on vigil

After court people asked me what I was thinking at the point. If I suspected that there’d be further business. Obviously I was very happy for Aaron. But I’d be lying if I didn’t say I was hoping I’d get called up too. I mean, it wouldn’t be the first time we’ve gotten awards at the same time.

I also thought about how things would change. Would I do anything different? My answer was no. I’d keep to the path I was on. I’d probably get the cookie eventually.

Then Robyyan said he had more business, and at that point I was pretty sure I knew what was next. 😀

After that I was sort of in a daze for the rest of the event. I was really surprised at how long it took to sink in. In fact I think only now it’s starting to feel real.

Needless to say, I was not expecting that to happen at GDOT. I thought we had another couple of years left at least, due to Martin if nothing else. I still had research I was planning to do. I think the fact that I wasn’t expecting it to happen for a while is the cause of it not sinking in. Most other important life events, I’ve either been in control of when they happened or have had plenty of advance warning. With this, one never knows. And one isn’t supposed to seriously plan until one is put on vigil. At least that’s how I’ve felt about it. 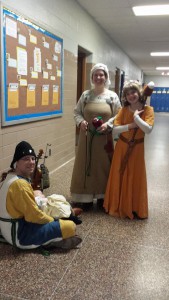 The rest of GDOT went well. Aaron and I got to play some 15th century music with Robyyan, which was oh so nice. Martin got to hear plenty of hurdy gurdy. He’s a pretty lucky baby. Martin enjoyed the event. He loves novelty, and the event provided lots. My garb worked pretty well for nursing. One highlight was seeing Alina and Magda and Gwommy dancing, and wondering who was playing recorder for them only to find that it was my piano student, Cassandra. 😀 Aaron and I didn’t take a Pennsic Pile because we weren’t anticipating having to play any dance music. Oh well. We didn’t have trouble playing from memory.

After GDOT, and after stopping at home to drop off instruments and change, Aaron, Martin, Robyyan, Fern, and I went out to Zingerman’s to celebrate. Tasty! I can’t remember the last time I had a sandwich there.

Over the last week I’ve been frantically trying to do research on Polish 15th and 16th century clothing, because I’d wanted to wear Polish garb for my elevation. Between the Internet and Aaron’s access to the UM library I’ve found enough information to make something approximating Polish clothes, but…. I really need more time to do a good job and from what I can tell the more distinctly Polish clothing has a headdress that would totally covers my ears (which I dislike as a musician) and is associated with old married women. Perhaps I’m old by 16th century standards, but I’d rather wait a little while before wearing that garb. 😛

So instead, I’ve decided to go with 15th century Burgundian. It will be semi-heraldic, which is to say red and white but no ermine and no clarions. And I’ll have a cool hat. That’s the plan anyway. Also there’s an image of a Polish shoemaker’s wife from the 16th century that’s essentially Burgundian, but with a different hat and some holes in the sleeves to let the chemise show through. So I won’t be wearing entirely not Polish clothes…

Aaron and I are having our ceremony together, but we’re having separate vigils. Also we’re planning to have two vigils: one at Pentamere 12th night so local people can come talk to us and one at Tree Girt Sea 12th night where we’re being elevated. Beyond that there will almost certainly be lots of music and dancing at both events. In particular I’m hoping we can make the music playing especially good at Tree Girt Sea for all of the out of town musicians coming to celebrate with us. 😀

Needless to say, I am thrilled and honoured and looking forward to the future. Whee!

Previous post: How to be a Better Dance Musician