This list has since been revised, please refer to the new version: Identifying Prowess in an SCA Musician Revised

This post is by Mistress Jadwiga Krzyzanowska and Mistress Kasha Alekseeva 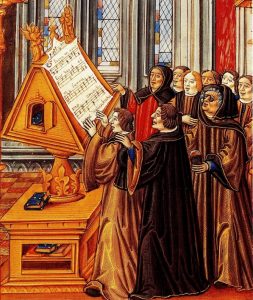 Ockeghem would be a strong candidate, but his ignorance of late-period English madrigals is SHOCKING

As musicians, part of our responsibility is to help others understand how to assess the ability of others who practice our art. With that in mind, we’ve put together this description of the skills and knowledge areas we expect in SCA musicians who can be said to have achieved “prowess” in the art of music.

Please keep in mind that this list represents our views (Kasha and Jadzia), and others may differ in the relative value they assign these skills. Also, it’s important to realize that this does not address the whole range of how we might evaluate people to recommend for SCA awards (leadership, innovation, virtuous behavior, etc. are also important), but specifically mastery of this art.

You will notice that our list refers primarily to the musical tradition of Western Europe. While this tradition is the most common musical interest area among SCA scholars, we recognize that other musical traditions also exist and have rich histories. For musicians whose area of expertise is one or more non-Western musics, please modify the skill/knowledge descriptions accordingly.

Proficiency with the Elements of Historical Music: A musician with high prowess will be competent in all of the following skills/knowledge areas for each category.

Note: Some instrument/voice types or musical traditions stress individual rather than ensemble performance. For performers whose musical style of expertise de-emphasizes ensemble work, this category may be less important.

In-Depth Understanding of Historical Music: A musician with high prowess will be competent in many (at least ⅔ – ¾) of the following skills/knowledge areas, including at least one in each category. For each area in which the musician is not proficient, the musician can name and contact at least one SCA musician who is proficient in this area.

Next post: Identifying Prowess in an SCA Musician (Revised)