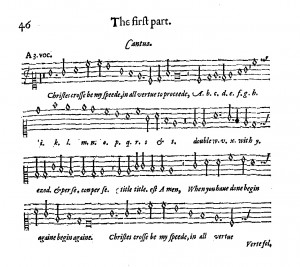 At St. Cecilia this year, my friend, Master Christian, gave me some sheet music he believed I’d be interested in. It was a three part piece by Thomas Morley, from his book, A Plain and Easy Introduction to Practical Music. Basically, Morley used the ABC song of the time to demonstrate counterpoint. The top-line contains the melody; the bottom two lines are the counterpoint that Morley composed.

Of course, I’ve been singing the Christes Crosse to Martin ever since. 😛 I will win the Internet when he can sing it.

Fun fact: it doesn’t have the letters J or U since I and J were and interchangeable as were U and V.

A couple of notes about the video:

If there’s interest, I could be convinced to record Morley’s first variation.